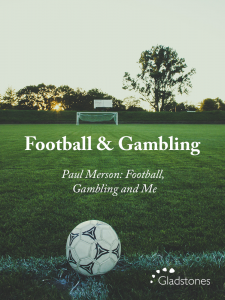 Paul Merson is best known for his glittering career in professional football that spanned over 21 years. He won two league titles, the FA Cup, League Cup and European Winners’ Cup with Arsenal. He also played for England at the World Cup and European Championship.

However, it’s his addiction to gambling that still plagues him today. He estimates to have lost more than £7 million to gambling. “I’ve been addicted to alcohol and cocaine, but the most destructive and only one I’m still struggling with is gambling. If I want to get drunk or high, I have to put something up my nose or down me. Gambling’s already in you, just waiting constantly, talking to you.”

When playing for Middlesbrough in the late 1990s, he earned around £20,000 a week following a record breaking transfer fee of £5million, at the time, from Arsenal. More than 20 years on, he now lives in rented accommodation with his third wife Kate, and their three young children.

In a recently released film Paul Merson: Football, Gambling & Me now available on BBC iPlayer, the 53- year- old explains how following a relapse, during lockdown, he has now handed over control of his finances to Kate. The relapse resulted in losing the deposit for a house he and Kate were hoping to move into with their three children.

During the film he talks candidly about his guilt and self-loathing, that accompanies all addictions, and often stops people from reaching out and seeking the help they need.  “I’d be sitting on the sofa and I’d look over at the kids,” he says. “The hate I had for myself, thinking about how I’d let them down. The scary thing is you know there’s only one outcome, but you can’t stop.”

Attempting to understand his addiction and dispel some of the taboos surrounding it, the film shows Paul meeting with other professional footballers who have also struggled with gambling.

Looking back over the years it seemed to Merson the access to large amounts of both time and money afforded by the footballer’s lifestyle, made him more susceptible to developing a problem. Research confirms he is not alone. In the last two years 150 current or former professional players have undergone treatment for gambling. A study conducted for the Professional Players Federation in 2014 showed 6.1% of sportsmen would be classed as problem gamblers, compared with 1.9% in the general population of young men. Therefore 3 times more likely to have a problem.

Paul came to dread playing an evening match where he could spend the whole day gambling in his room and feels the  ‘gambling has literally rewired my brain.’ Through discussions with different doctors he has come to realise ‘I’ve never had that off switch’ which makes it possible for others to stop.

In the film Merson takes part in an experiment conducted by Dr David Erritzoe, a consultant psychiatrist at Imperial College London, whose team are  working to map the brain and pinpoint the neurobiological basis of gambling addiction so new treatments can be developed. It strikingly demonstrates how differently Merson’s brain responds to gambling adverts in comparison to most people. Merson found the results “scary”. In a lightbulb moment it was clear to see how his brain responded much more actively to images of gambling than to images such as nature, food and family that would be typical of evoking pleasure.

BBC One – Paul Merson: Football, Gambling and Me, Paul’s brain on gambling

Now he knows more about how his brain responds to gambling adverts and how it affects him he turns them off, seeing them as triggers. However, its left him feeling ‘betting companies are preying on ill people’.

The government is currently reviewing the 2005 Gambling Act, which relaxed regulation around gambling adverts. In the UK there is less regulation than other countries and it concerns Merson nearly half of all premier league clubs are sponsored by gambling companies. This translates to a logo for a gambling company appearing every 10 seconds during a match. And technology now enables gambling 24/7 on smart phones.

Whilst not advocating a complete ban on gambling, as Mercer appreciates some people are able to enjoy it responsibly, he is calling for further measures to be put in place by companies to protect more vulnerable customers and is campaigning for the industry to act more responsibly.

60% of profits in the industry come from 5% of people and young men are most likely to get addicted. Some companies are alleged to use data profiling to entice customers when in “win back” mode (where a person has lost a significant amount and is trying to win it back) and tailor adverts from data collated about their personal preferences to encourage them to keep playing with, at times, disastrous consequences.

In response to the film, the Betting and Gaming Council said it did not recognise “many of the claims made in the documentary” and “completely reject suggestions that our industry targets vulnerable customers.

This is strongly contested by charities such as Gambling with lives and The Big Step and there are some stark statistics to support this position. The number of gambling related hospitals admissions has doubled in the last 6 years with an average of 1 suicide linked to gambling every day  in the UK. The coalition against gambling Ads www.CAGA.uk cites research that 450,000 11-16 year olds gamble and 55,000 of them are already reported to be addicted. As online gambling is not permitted until the age of 18 suggest current regulations are not working.

“Of course, some people are going to watch the show and think: ‘Forget him, he lost £7m, good job’.

“If one person watches it and says ‘I need help’ that would be a major success story for me. I wouldn’t wish this on anybody.”

Addiction is a serious health condition and yet people are blamed for their ill-health and their families are shamed into silence. It is nothing to do with an individual failing, addiction can happen to anyone from any walk of life.

Gladstones have been supporting individuals based on their personal experiences and needs, for over 10 years, tailoring bespoke care to individuals. Recovery is possible. The cycle can be broken and the misery can end.

If you are concerned about yourself or a loved one,  don’t suffer in silence, give us a call today.

We’re here to help and ready to listen.